3 Intriguing UNESCO World Heritage Sites in Berlin You Must See

Berlin has three UNESCO World Heritage Sites, and they are each worthwhile attractions to visit. UNESCO sites are designated for their cultural and/or natural significance with a goal of preserving them. Travelers who enjoy visiting UNESCO sites should be sure to include these on their itinerary.

These Berlin UNESCO sites are interesting landmarks in Berlin, and they have interesting history that makes them an important part of any trip to Berlin.

So what are the 3 UNESCO World Heritage Sites in Berlin? Keep reading for all the details.

Berlin’s three UNESCO sites all cover big areas, and two of them have multiple locations. This makes it a little tricky to see everything included in each site.

But if you’re a big fan of UNESCO, with a little dedication, you can explore many of the locations included in each site. You’ll need to be here for several days to really tackle them all. I recommend at least 3 days in Berlin, but more is better.

Museum Island is both a physical island in the Spree River and a collection of the city’s most famous museums. These five museums were built between 1824 and 1930 by accomplished architects with the goal of linking the ensemble as well as connecting each museum building to its collections.

Despite extensive damages from World War II, the buildings have been restored and preserved with great care. The museums and the surrounding areas are protected under a historic conservation area which even includes adjacent gardens and bridges.

Museum Island in Berlin has been a UNESCO Site since 1999. If you only have time for one of the UNESCO World Heritage Sites in Berlin, this is the easiest one to get to.

Here’s a short description of each museum located on Berlin’s Museum Island:

The Pergamon Museum houses antiquities and collections of ancient art. The collections are divided into three main groups: Collection of Antiquities, Museum of the Ancient Near East, and Museum of Islamic Art. This is the most visited museum in Germany.

The Bode Museum is at the northern end of the island, and it houses a collection of sculptures and Byzantine art collections. You’ll also find a collection of coins and medals that show human history through coins and other metals.

The Altes Museum is a museum dedicated to the art and culture of the Greeks, Etruscans, and Romans. With its stately columns and sweeping staircase, the building was clearly designed with its collections in mind.

The Neues Museum contains collections of prehistoric objects, classical antiquities, and Egyptian art. And though the building was restored decades after WWII, many of its scars were incorporated into the building’s facade.

The Alte Nationalgalerie houses impressive collections of Romantic, Impressionist & early Modernist art. The building itself was designed to look like a temple.

To reach Museum Island take the U5 to the Museumsinsel station or take the S3, S5, S7, or S9 to the Hackeschermarkt station.

Each of these five museums is open Tuesday through Sunday 10am to 6pm, closed Mondays. Holiday hours may differ.

A great option that’ll save you some money is the Museum Island Welcome Card, which gives you a 72 hour transport pass, free entry to Berlin’s Museum Island, and discounts at many other museums and attractions.

The museums on Berlin’s Museum Island also participate in Free Museum Sundays. This program includes so many museums throughout the city, allowing you to visit free of charge on the first Sunday of every month. It’s one of the best free things to do in Berlin.

Check out our full guide to visiting Museum Island in Berlin.

Palaces and Parks of Potsdam and Berlin

The UNESCO site under the name of Palaces and Parks of Potsdam and Berlin is a huge collection of important palaces and parks located mostly in Potsdam, but there are a handful in Berlin.

There are over a hundred individual buildings and parks, so it’s unlikely you’ll get to all of them in one trip, but you can certainly try!

The different locations of this ensemble of palaces and green spaces were designed and constructed between 1730 and 1916. The historical and cultural importance of these sites, highlighted by the significant architecture and landscaping, led to the ensemble becoming a UNESCO World Heritage Site in 1990.

If you’re considering day trips from Berlin, a day trip to Potsdam is an excellent choice. Not only is it a nice change of scenery and a cute town, but it’s where you’ll find the majority of the UNESCO locations.

If you’re planning a day trip from Berlin to Potsdam, a tour can really help you make the most of your time. Consider one of these Potsdam tours.

Here’s a short description of a few of the locations included in the Palaces and Parks of Potsdam and Berlin:

Built in the mid 1700s, Sanssouci Palace was built as a summer residence for the king, Frederick the Great. The palace is a great example of the German rococo architectural style, and the rooms are still decorated with the original furnishings.

This is the most popular palace to visit in Potsdam. Sanssouci Palace is also one of the most famous palaces in Germany.

Neues Palace was built about 20 years after Sanssouci, and Frederick the Great intentionally had it built in a drastically different style.

The New Palace is much more elaborate compared to Sanssouci’s modesty (I mean, as modest as a palace can really be) and was mostly used for hosting events and important guests.

Charlottenhof Palace is actually a remodeled farmhouse converted into the neo-classical villa you see today. The palace interiors haven’t changed much over the years.

Built between 1914 and 1917, Cecilienhof Palace is most famous for being the location of the Potsdam conference, which took place after the end of World War II. This is when the Allies met to discuss and decide how to handle post war Europe and Asia.

The Potsdam Conference is seen as both the end of World War II and the beginning of the Cold War.

Babelsberg Palace was the summer residence for 50 years for Prince William of Prussia and his wife Princess Augusta of Saxony-Weimar. It was originally built from 1833 to 1835, and though it started as a small cottage, many extensions and additions were constructed over the years.

Due to looting after World War II, the original furniture is gone, but the palace was recently renovated and is quite impressive.

Located in southwest Berlin in the River Havel, Peacock Island is a gorgeous island with a unique fairy tale castle. This summer palace was built in the late 1700s for Friedrich Wilhelm II.

And yes, there are peacocks roaming the island. Though it looks like the palace is made of white marble, it is actually painted wood.

If you’re taking a day trip from Berlin to Potsdam using public transport, you will need a ticket that includes zone C. So if you’re staying inside the Ringbahn, which is most likely while you’re visiting Berlin, you will need an ABC ticket.

The locations that are part of the Palaces and Parks of Potsdam and Berlin that are within the Berlin city limits only require an AB ticket.

You can visit many of the Potsdam sites in one day since they are reasonably close to each other. But to visit the ones in Berlin, you’ll need more time since most of them aren’t walking distance from each other.

Most palaces charge an entrance fee, but you can enjoy the outsides and the beautiful gardens for free.

Note that this Berlin UNESCO site does not include the Charlottenburg Palace. Even though it’s one of the best castles in Berlin, it’s not in the same region and is not a UNESCO site.

This is the UNESCO World Heritage Site in Berlin you probably haven’t heard of before. It’s not as glamorous as the other two, but it’s a must for serious UNESCO fans.

The Berlin Modernism Housing Estates is a group of six apartment complexes in different sections of the city. They were built in the early 1900s using an innovative approach to housing policies. As a group, this has been a UNESCO World Heritage Site since 2008.

According to UNESCO: “The property is an outstanding example of the building reform movement that contributed to improving housing and living conditions for people with low incomes through novel approaches to town planning, architecture and garden design.”

Here are the six locations included in this Berlin UNESCO World Heritage Site:

The Falkenberg Garden City estate is in the Treptow-Köpenick district of Berlin, the farthest property on this list from the center of the city. The closest Sbahn station is S Grünau.

The Siedlung Schillerpark estate is in the Wedding district and isn’t too far from the Weiße Stadt estate, so it’s not hard to see both in a short amount of time. The closest Ubahn station is U Rehberge.

This apartment complex is known for its unique horseshoe shape and has lots of outdoor space. These apartments are located in the Britz district of southern Neukölln, and the closest Ubahn stations are U Blaschkoallee and U Parchimer Allee.

The Wohnstadt Carl Legien was built between 1928 to 1930 with the idea of being modern, airy, and light. These apartments are located in Prenzlauer Berg just outside the Ringbahn. The closest Sbahn station is S Prenzlauer Allee.

Weiße Stadt means “white city” and this housing estate is comprised of white buildings from the late 1920s. They are located in the Reinickendorf, just north of central Berlin, and the closest Ubahn stations are U Paracelsus-Bad and U Residenzstr.

The Siemensstadt property is located in Spandau, in the northwest section of Berlin, and includes a 340-meter-long (1,115 feet) residential building with a gently curved design. The closest Ubahn station is U Siemensdamm.

It takes some real dedication to visit all six of the properties included in the Berlin Modernism Housing Estates. They should be visited on a trip to Berlin when you have plenty of time, and if possible, spread it out over several days and combine with other nearby attractions.

While visiting these estates, remember that these are people’s homes. Be respectful of the fact that locals still live here.

I want you to have the best trip to Berlin, and hopefully this guide to UNESCO World Heritage Sites in Berlin helps. But there are lots more tips on the site! 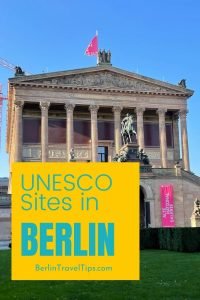 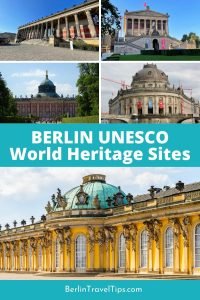 13 Places to See the Berlin Wall + 9 Other Wall Attractions