How to Get From Berlin Airport to City Center: Stress-Free Tips

Landing in a new city and trying to figure out how to get from the airport to the city center can be confusing, especially if you’ve traveled a long distance and you’re exhausted. Luckily getting from Berlin airport to city center is straightforward, and you have several options.

But in late 2020, after more than a decade of delays and drama, the Berlin Brandenburg Airport (BER) finally opened, and the other two airports closed.

This blog post will explain how to get from Berlin Brandenburg Airport to city center.

There are several different ways to get from the Berlin airport to city center. The one you choose depends on where exactly you’re going in the city.

Let’s take a look at the various options for getting from BER to Berlin’s city center.

Berlin Brandenburg Airport is located in zone C of Berlin’s transport system. And chances are you’re staying in zone A, though you should verify that.

This means you’ll need a ticket that’s valid for zones ABC in order to get from the Berlin airport to the city center.

If you happen to be staying in zone B (outside the Ringbahn route but still in Berlin city limits) you’ll only need a zone BC ticket. But most tourists stay in zone A because that’s where most of the attractions are.

There are plenty of ticket machines in the airport, and the machines have an English option, so you shouldn’t have a problem buying a ticket for your journey into the city.

FEX stands for Flughafen Express, which is the airport express train. This is a red regional train that starts at the airport and makes stops at Ostkreuz, Gesundbrunnen, and Berlin Hauptbahnhof.

Note that the FEX train leaves from terminal 1-2 and does not stop at terminal 5. Terminal 5 isn’t currently open, so this won’t affect you right now.

The FEX train runs twice an hour and takes a little over 30 minutes from the airport to Hauptbahnhof. You can get out at Ostkreuz or Gesundbrunnen, both of which are major transport interchanges, and switch to a different line.

There’s plenty of space for luggage on the FEX train. It’s a double decker train, and the lower level has big sections designated for luggage, plus there are luggage racks for smaller items above the seats on both levels.

There is a regional train route that runs from the Berlin airport to the city center, and this could be a good option if you’re staying closer to one of the stops on those routes, or if there’s a long wait for the next FEX train.

The RB10 takes about 30 minutes to get from the airport to Hauptbahnhof. It makes stops at Südkreuz and Potsdamer Platz, which are both big transport hubs where you can switch to other lines.

A few other regional trains (RB22 and RE7) also leave from the airport, but they do not go to Berlin city center. These are good options if you’re actually going to Potsdam or a variety of other locations outside of Berlin.

The Sbahns are the (mostly) above ground trains which are helpful for getting around in Berlin. Two lines, the S9 and the S45, leave from the airport and travel into Berlin’s city center.

The S9 takes 50 minutes to reach Hauptbahnhof from the airport, and it also stops at places like Warschauer Str, Ostbahnhof, Alexanderplatz, Hackescher Markt, and several others. It continues beyond Hauptbahnhof, ending the Spandau station in the northwest corner of Berlin.

The S45 takes 41 minutes to reach Südkreuz (its end station) from the airport. Before reaching Südkreuz, it also stops at S&U Neukölln, Hermannstr, and Tempelhof.

Since the Sbahns take longer than the FEX train or the regional train, they’re not ideal options. However, they do travel to other parts of the city, and if those stations are your actual destination, it could be easier and less stressful to use the Sbahn to avoid having to switch somewhere.

Also, if you just missed an FEX train, and the next one isn’t for another 30 minutes, it’s probably worth hopping on an Sbahn rather than sit around waiting.

If you’re truly trying to get from the airport to Berlin city center, the bus is probably not an efficient option. But there might be situations where you need the bus, like if there’s a rail strike.

Bus lines X7, X71, and N7 (night bus) have departures from the BER airport, and you can use the bus to reach the U7 Ubahn line. Take any of these buses to the U Rudow station, switch to the U7, and from there you can switch at many other stations such as S&U Neukölln or Hermannplatz.

It doesn’t happen often, but if there is a Deutsche Bahn rail strike, none of the train options will run, or they will have fewer departures. The Sbahns are technically part of the Berlin transport system, but they’re actually operated by Deutsche Bahn.

This is when the bus to U7 route is a good option to have. Luckily strikes don’t happen often.

Taking a taxi from Berlin airport to city center

If you’d rather not deal with the trains, there’s always the option to get a taxi. However, it’s worth noting that there is a short supply of taxis that are licensed to travel from the airport to the city center since the airport is located in Brandenburg, which is a different state.

A taxi from the airport to Berlin city center can cost anywhere from 50 to 80 euros. Expect a similar price for Uber.

Welcome Pickups from the Berlin Airport

Maybe taking public transport is a little intimidating to you, especially if you’ve just gotten off a long flight. And maybe you’re worried about the uncertainty of getting a taxi.

Having a ride already secured specifically coming to pick you up can save you a lot of stress. Welcome Pickups is a great option for getting from the Berlin Airport to the city center, wherever you’re staying.

Check them out and book your Berlin Airport transfer here.

Are you flying into Berlin but going somewhere else? You have options too.

A few long distance trains (train numbers starting with IC) stop at the Berlin airport and travel on to destinations such as Dresden or Rostock. Local transport tickets are not valid on these trains.

If you’re traveling further by train, check out Deutsche Bahn for train tickets and routes.

FlixBus also has several bus routes that stop at the airport. The long distance buses are in a parking lot outside the front of the airport, and from here you can reach other parts of Germany, Poland, and many other destinations.

It’s always a good idea to compare FlixBus with Deutsche Bahn to see which one works best for you based on both time and price.

How to get to Berlin Brandenburg Airport terminal 5

Terminal 5 isn’t currently operating, but when it does, it will used for low cost airlines. It is not served by the FEX train and regional trains.

I want you to have the best trip to Berlin, and hopefully this information about how to get from Berlin Brandenburg Airport to the city center is helpful. But there are lots more tips on the site! 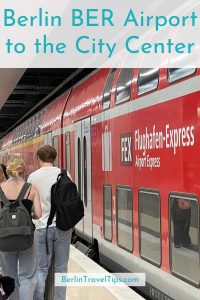 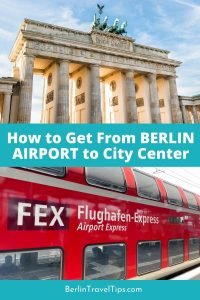 Ali is originally from the US, but she’s been living in Germany since 2011. In 2015, she and her husband moved to Berlin where they now live with their small dog. They even bought an apartment in Berlin in 2021 – Berlin is definitely home now! Ali’s goal is to show you everything you need to know for enjoying a trip to Berlin.
25 Fun Outdoor Activities in Berlin Guide to Visiting the Berlin Wall Memorial at Bernauer Strasse

How to Get from Berlin to Hamburg: Train and Bus Options

How to Get From Berlin to Munich by Train and Bus

How to Get from Berlin to Leipzig: Train and Bus Options