Do you love impressive views when you travel? Berlin has quite a few hotels with views worth splurging on, and one of my favorites is the 25Hours Hotel next to the Bikini shopping mall. One side of the hotel overlooks the Berlin Zoo and Tiergarten park – definitely an enjoyable view.

This quirky yet comfortable hotel is great if you’re looking for something a little upscale but not overly fancy. Let’s take a look at the 25Hours Hotel from when my husband and I stayed there.

Upscale but casual atmosphere? Views that can’t be beat? The 25Hours Hotel is all this and more. If you’re trying to decide where to stay in Berlin, I highly recommend the 25Hours Hotel.

Check availability and prices for the 25Hours Hotel.

The 25Hours Hotel in Berlin has a variety of room types and sizes, but the biggest difference is whether you book a Jungle room or an Urban room. This makes a huge difference, so make sure you book the right one.

The Urban rooms are on the city side of the hotel, as opposed to the park side. Rooms on this side of the hotel will have views of Kaiser Wilhelm Memorial Church and a few other not-so-impressive buildings.

The Jungle rooms look out over the Berlin Zoo and Tiergarten park. In my opinion, this is the whole reason to book a room at this hotel, so it would be a shame to book an Urban room instead of a Jungle room.

You’ll pay a little more for the Jungle rooms, but it’s worth it. With floor to ceiling windows, you can enjoy this view throughout your stay.

The rooms even have a hammock, so you can lounge in the hammock while gazing out the window. It’s a great way to start your day or unwind after a day of sightseeing.

A look at the Jungle room

We booked the Jungle room. Because really, if you’re going to stay at the 25Hours Hotel in Berlin, you might as well get a room with those fantastic views.

A hammock was draped across the room near the huge floor to ceiling windows. A thick curtain could be pulled across the whole way to keep the sun out in the morning.

The room came with a desk, one stool, and a mini bar. There was plenty of space for storing our luggage.

A note on that: There was a big curtain you could close if that level of openness bothers you. And also, the toilet was in a separate little space with its own door, so you really do have complete privacy there.

Instead of a standard “do not disturb” or “please clean room” sign, the 25Hours Hotel even provided a booklet of quirky options such as the one pictured above. A sign that says “Police crime scene. Move on.” is much more entertaining, and it was fun to see how many different options they had.

A word about German pillows

The most common pillow you will find in Germany is a big square (80cm x 80cm or 31.5in x 31.5in) feather pillow. This is the standard at hotels, and if you love feather pillows, you’ll do fine here.

I personally think they’re awful. They squish down flat in no time at all, and the idea of re-fluffing them every 10 minutes throughout the night drives me batty.

Sometimes hotels have other types they can offer you, so if you’re like me and don’t like these pillows, always ask at reception.

Unfortunately this hotel only had a non-feather synthetic alternative that acted exactly the same as the feather ones. And that’s actually a somewhat common thing, to not have a truly different kind of pillow.

Another thing I loved about the 25Hours Hotel is that it’s very dog friendly. We have a 3kg (almost 7lb) Yorkshire terrier, and we often travel with her, so it’s great to find a hotel that not only allows dogs but makes them feel welcome.

When we came into our room, we saw they had set up a giant dog pillow and dog bowls, and there was a bag of treats. The pillow was ridiculously big for our small dog, but if you have a large dog, this would be great.

Most restaurants in Germany allow dogs, so it wasn’t a surprise that we were able to take her into the Monkey Bar and the Neni restaurant for breakfast. At breakfast, we took turns going up to the buffet so the dog could stay at the table.

The 25Hours Hotel charged us 20 euros per night for the dog. It’s pretty standard for hotels to charge a pet fee, but it’s wonderful when you feel like you’re actually getting something for that money.

My husband and I have been to Monkey Bar on the top level of the 25Hours Hotel several times before we actually stayed at the hotel. It’s really a fantastic bar, and if you end up booking an Urban room instead of a Jungle room, you should at least get a drink at the bar.

The bar also has the amazing views over the Berlin Zoo and Tiergarten park. It’s one of the best rooftop bars in Berlin for this reason, plus their cocktails are creative and tasty.

Even if you don’t end up getting a seat right up at the windows, it’s easy to go for a little stroll to see the view. And there’s a small outdoor section too.

Even the bathrooms have floor to ceiling windows. My husband says the urinals in the men’s room are lined up along the window (apparently one way glass) so you can enjoy the view at the same time.

Sometimes the bar has a live DJ, so if this is appealing to you, plan ahead. Or if that seems like too much noise, those are times to avoid the bar.

The Neni restaurant is on the same floor, and it’s a great place for a meal. You can also order a few things from their menu to snack on while you’re at Monkey Bar.

This is also where breakfast is held in the morning. And of course, the space comes with those huge floor to ceiling windows and unbeatable views.

Other perks of the 25Hours Hotel

The 25Hours Hotel has a relaxing common area on the same floor as reception. This is great if you want somewhere else to sit besides your room, and there’s even a handful of hammocks here.

If you want to explore Berlin by bike, you can rent a bicycle from the hotel. The hotel also has a sauna, which also has those wonderful views of Tiergarten.

Are you traveling to Berlin in summer? You’ll be happy to know that the 25Hours Hotel has air conditioning, something not every hotel has.

And don’t worry if your German is a little rusty. Most of the staff we encountered spoke a good amount of English.

Things do do near the 25Hours Hotel Bikini Berlin

The 25Hours Hotel is located in the Charlottenburg district of western Berlin. You’ll find lots of things to do in this area, and it’s well connected to other parts of the city.

Berlin Zoological Garden, or simply Berlin Zoo, is the oldest and most famous zoo in Germany. Considered one of the most popular zoos in Euroe, the Berlin Zoo is home to more than 20,000 animals, and even boasts its very own aquarium.

If you like shopping, this part of town is perfect for you. Not only is the 25Hours Hotel attached to the Bikini Berlin shopping mall, it’s also just minutes away from the Kurfürstendamm shopping district and the famous KaDeWe (Kaufhaus des Westens) department store.

One of the most beautiful castles in Berlin, Charlottenburg Palace was built in the late 1600s as a summer palace for Sophie Charlotte. The interiors are gorgeous, but if you just want to admire the outside, it’s free to roam through the gardens.

To get there, take the M45 bus from the Jebensstr. bus stop (basically outside the Zoo Station) to the Luisenplatz/Schloss Charlottenburg bus stop.

This church was built in the 1890s, but was damaged in WWII air raids in 1943. It was not rebuilt and instead has been left much as it was as a stark reminder of the destruction of war.

Tiergarten is often compared to NYC’s Central Park because of its size and the fact that it’s a peaceful green oasis in the middle of a chaotic city. Wander the paths, lounge in the lawns, admire the various statues, fountains, and memorials.

While there are lots of great beer gardens in Berlin, two really nice ones are located in the western section of Tiergarten, not too far from the 25Hours Hotel. If you’re visiting in warm months, check out Schleusenkrug and Cafe am Neuen See.

Check availability and prices for the 25Hours Hotel.

I want you to have the best trip to Berlin, and hopefully this review of the 25Hours Hotel in Berlin helps. But there are lots more tips on the site! 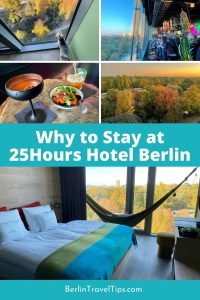 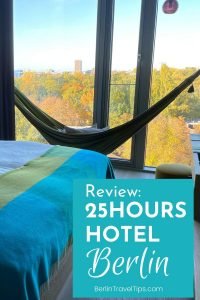 Ali is originally from the US, but she’s been living in Germany since 2011. In 2015, she and her husband moved to Berlin where they now live with their small dog. They even bought an apartment in Berlin in 2021 – Berlin is definitely home now! Ali’s goal is to show you everything you need to know for enjoying a trip to Berlin.

Ali is originally from the US, but she’s been living in Germany since 2011. In 2015, she and her husband moved to Berlin where they now live with their small dog. They even bought an apartment in Berlin in 2021 – Berlin is definitely home now! Ali’s goal is to show you everything you need to know for enjoying a trip to Berlin.
11 Pretty Places to Find Fall Foliage in Berlin 17 Fun Weekend Trips From Berlin

Where to Stay in Berlin: A Local’s Guide to Berlin Hotels & Neighborhoods