Berlin has tons of amazing tourist attractions and landmarks. Explore the city’s history from old to not-so-old and take lots of pictures!

These landmarks help shape the landscape of Germany’s capital and add to its personality, and each one has a story behind it. If you want to see Berlin’s most recognizable and famous landmarks, we’ve got you covered.

Must See Landmarks in Berlin

Check out these Berlin landmarks that should definitely be included in your itinerary and your Berlin bucket list.

This is probably the most recognizable landmark in Berlin and the whole of Germany. It’s the last remaining city gate in Berlin and was built between 1788 and 1791.

During the Cold War, the gate sat on the line between East and West Germany and was inaccessible. Once the Wall came down, Brandenburg Gate came to symbolize the reunification of Germany.

The TV Tower, or Fernsehturm, could easily challenge Brandenburg Gate for the award of most famous landmark in Berlin. The tower was built during the Cold War by the Soviets and was purposely constructed to be high enough to see from almost everywhere in the city.

Today there aren’t a lot of really tall buildings in Berlin, so you can still see the TV Tower from all over. Sometimes you’ll turn a corner and there it is. Don’t miss this one on your trip to Berlin.

The TV Tower is also one of the most popular places for views of Berlin from above. But the lines can be long, so it’s best to book tickets ahead of time.

The seat of the German government is here in the impressive Reichstag Building, located just a few steps away from Brandenburg Gate. It’s topped by a unique glass dome, which is accessible to the public.

You can actually take a free tour with audio guide, and you’ll learn about Germany’s government, the building, the surrounding areas, and more interesting facts. The views from here are really nice, and if you’re lucky, you might even get to see the Parliament below. You must book your tour in advance.

>>Check out our list of the best World War II and Cold War attractions in Berlin.

Sitting in a roundabout in the middle of Tiergarten, the Victory Column is another monument you shouldn’t miss while you’re in Berlin. If you look through the columns of Brandenburg Gate towards the west, you’ll see the golden tower down the street.

It was originally built to honor Prussia’s victory in the Franco-German war, and today it’s a popular tourist attraction in Berlin. Climb the stairs for great views of the city.

Completed in 1699, this was the summer palace for Sophie Charlotte as it was still outside the Berlin city limits at that time. When she died at the young age of 36, the palace was renamed to honor her. Today this popular attraction is well worth a visit.

Inside is a museum where you can see tableware, porcelain, Prussian crown jewels, and more as well as learn more about the history of Charlottenburg Palace. Even if you don’t go inside, the gardens of the palace are quite impressive, and free of charge.

This resulted in the Berlin Airlift, which started in June 1948. Allied partners supplied West Berlin residents from cargo planes, and one plane took off or landed every 30 seconds for over a year. The Airlift Memorial honors this effort.

This is just one of many Cold War sites you can see in Berlin.

This church was built in the 1890s but was heavily damaged from air raids in 1943 during World War II. Rather than rebuild the church when the war was over, Berlin decided to leave it how it was.

It’s located not far from the Zoo and now stands as a reminder of how horrible and destructive war is. I recommend adding this landmark to your Berlin itinerary.

The Oberbaumbrücke spans the Spree River connecting Friedrichshain and Kreuzberg.

Since the river formed part of the border between East and West Berlin, this bridge served as one of the pedestrian crossings between the two sides. After the Wall came down, the bridge was fully repaired, allowing cars to cross as well.

The Ubahn line that once crossed here was once again connected to the Warschauer station on the east side of the river. The bridge’s old appearance coupled with modern vehicles makes it an interesting landmark to see.

This is one of the more quirky landmarks in Berlin. Standing 30 meters (about 98 feet) tall in the middle of the Spree River, the Molecule Men statue is quite a sight to see. The holes in the men are supposed to represent molecules.

The statue was created in the 1990s and can be seen from the shores of the river in parts of Kreuzberg and Friedrichshain, from the Sbahn while traveling between Ostkreuz and Treptower Park, or from certain boat sightseeing tours.

I think we can all agree that the East Side Gallery is one of the most popular attractions in Berlin. It’s very photogenic, and it represents a lot of history.

This is one of the longest remaining sections of the Berlin Wall, and it’s covered in art. Some sections have been there for decades while others change from time to time, so there’s a wide spread of messages from each work of art.

Another section of the Berlin Wall that you should definitely check out is the Bernauer Strasse Wall Memorial. This memorial describes the history of a street divided down the middle by the Wall and how it affected those who lived there.

The visitor center shows two excellent short films (English available) about the Wall, and the memorial itself stretches for nearly a mile. I highly recommend watching these videos as they are very moving and insightful.

The Berlin Cathedral, or Berliner Dom in German, sits alongside the impressive museums on Museum Island and is a Protestant cathedral, not a Catholic one. It has a long history and has been repaired and rebuilt over the years.

Church services still take place here, but you can tour the building when services are not going on. You can even climb to the top for views.

Berlin doesn’t have a main square like many European cities, but instead it has ended up with several squares in Mitte (which means middle or center) that could be considered central city squares. Gendarmenmarkt is undoubtedly the most beautiful of them.

It’s worth visiting this Berlin landmark any time of the year, but if you’re visiting in December, Gendarmenmarkt hosts one of the prettiest Christmas markets in Berlin.

Located in Alexanderplatz, the Weltzeituhr is another quirky attraction in Berlin. Weltzeituhr means world time clock, and it shows what time it is currently in Berlin but also in dozens of cities around the world.

The cities are placed around the globe so you can see where they are in relation to the rest, plus they’re placed in the proper hemisphere. It’s an easy meeting spot in a busy square and a fun way to see what time it is in another part of the world.

Checkpoint Charlie is the most famous border crossing between East and West Berlin. Once the Wall fell and Berlin became a popular city for tourism, Checkpoint Charlie became a must see attraction in Berlin. Men dressed as American soldiers used to be there for photo ops, but they have been banned.

If you happen to be nearby for something else, go take a look. But I promise you, it’s the most overrated sight in the city, and it’s totally fine to skip it.

The nearby Checkpoint Charlie Museum is much more informative and definitely recommended.

The Olympic Stadium located in western Berlin is an impressive place to see. It was used for many Nazi propaganda events but today holds concerts and other less controversial events.

You can take a tour of the building on non-event days, and the bell tower is great to climb for impressive views of the city. If you have time for this Berlin landmark, it’s worth the effort.

For museum lovers, visiting Museum Island is a must. This group of five museums sits on an island in the Spree River in the Mitte district in the middle of so many tourist attractions.

Museum Island is also a recognized UNESCO World Heritage site. It’s one of three Berlin UNESCO sites you should see.

The museums here are the Pergamon Museum, the Bode Museum, the Altes Museum (Old Museum), the Neues Museum (New Museum), and the Alte Nationalgalerie (Old National Gallery). Their striking appearance matches the wealth of exhibits found inside these Berlin museums.

If you plan on visiting a lot of museums in Berlin, it’s worth looking into a Welcome Card to save you some money.

Another option is the normal Welcome Card which gives you discounted entrance to the museums on Museum Island plus discounts at many other museums and attractions. It also includes a transport pass with an option for either 48 hours, 72 hours, 4 day, 5 day, or 6 day.

I want you to have the best trip to Berlin, and hopefully this list of Berlin landmarks helps. But there are lots more tips on the site! 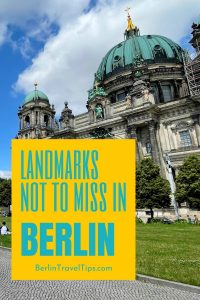 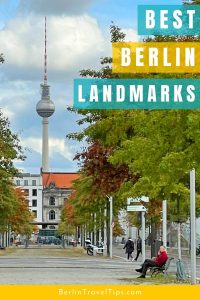 How to Get Around in Berlin: A Guide to Berlin Public Transportation 11 Fun Places to Find the Best Craft Beer in Berlin

13 Places to See the Berlin Wall + 9 Other Wall Attractions