7 Tips for Visiting the Victory Column in Berlin

The Victory Column, or Siegessäule in German, is one of the most recognizable landmarks in Berlin, and its location in the center of Tiergarten makes it easy to include on your itinerary. This guide to visiting the Victory Column in Berlin will tell you everything you need to know to enjoy this attraction, including history, directions, and more.

Where to stay near the Victory Column

Victory Column is basically in the middle of a huge park, so there aren’t a ton of hotels nearby. But you have lots of options that are either near Brandenburg Gate or near the Berlin Zoo. Here are some hotel recommendations for where to stay in Berlin near Siegessäule.

Midrange hotel located on the western edge of Tiergarten Park

For a more detailed look at the different neighborhoods and our hotel recommendations, check out our guide to Berlin hotels and neighborhoods.

There aren’t a ton of tours that really focus on the Victory Column, but some do pass by it or at least stop for a few minutes to tell you more about it. Sightseeing tours can be a great way to see a lot of things in a short amount of time.

The information guides provide can really make exploring a city more enjoyable. Here are a few Berlin tours we recommend:

History and Facts about the Victory Column

The Victory Column in Berlin was built to commemorate Prussia’s (basically Germany at that time) victory over Denmark in the Second Schleswig War in 1864. But because building things takes time, and Germany apparently got involved in a lot of wars during this time, it came to represent victory in two other wars as well, against France and Austria.

Originally the Siegessäule was located on Königsplatz, which today is Platz der Republic in front of the Reichstag Building. But in the late 1930s when Hitler was trying to transform Berlin and his vision of the German empire, the column was moved to its current location 1.5km (just under 1 mile) away.

The column’s total height is 67 meters. At the top of the column is a bronze sculpture of Victoria, the goddess of victory. This sculpture weighs 35 tons.

How to visit the Victory Column

The Victory Column is easy to combine with other Berlin attractions, such as Tiergarten, Brandenburg Gate, the Reichstag Building, and the Holocaust Memorial. If you simply want to see it, you can see it from many parts of Tiergarten and from Brandenburg Gate.

But did you know you can climb the Victory Column? The viewing platform is at 51 meters, just below the bronze sculpture.

Climbing to the viewing platform towards the top of the column is a great way to see views of Berlin from above. The views from the TV Tower are great, but if you’re looking for sweeping views of the city that include the TV Tower, the Victory Column is a good choice.

I also think climbing the Victory Column is a great option because it’s a lot cheaper than the TV Tower, so if you’re traveling to Berlin on a budget, this is a good alternative. The trade off is that there’s no elevator, and you’ll have to climb 285 stairs to get those views.

It’s worth climbing any time of year, but if you happen to be visiting Berlin in autumn, I especially recommend going to the top. From the viewing platform, you’ll get a spectacular view of the colorful leaves in Tiergarten.

>>Read: Where to See Cold War Sites in Berlin

What to wear on your visit

Especially if you plan on climbing the Victory Column, wear comfortable shoes to tackle all those stairs. Dress for the weather at the time of year you’re visiting Berlin.

>>Read: What to Wear & What to Pack for Berlin, Germany: Your Ultimate Berlin Packing List

How to get to the Victory Column

The Victory Column is located at Großer Stern, which is a big intersection and roundabout in the middle of Tiergarten park. You can get there on foot from Brandenburg Gate by walking west on Strasse des 17. Juni, and it’s about 2km away.

Bus 100 (as well as a few other bus lines) has a stop at Großer Stern. The closest Ubahn station is U Hansaplatz (U9) and the closest Sbahn station is S Bellevue (S3, S5, S7, S9), both of which are about 1km away.

Once you reach Großer Stern, please don’t try to run in front of traffic to get to the Victory Column! Look for the staircase that takes you under the street and over to where the column sits.

Things to know before you go

Before you visit the Victory Column, here are a few more pieces of advice to help you enjoy this popular Berlin landmark.

How much does it cost to visit the Victory Column

Seeing the Victory Column from the outside is free. But if you want to climb, entrance tickets are 4 euros (cash only!), making it one of many inexpensive things to do in Berlin.

You can see the Victory Column any time of day, but be aware of opening hours if you want to climb to the viewing platform.

How long do you need at the Victory Column?

If you don’t plan on climbing the Victory Column, you can see it in a matter of minutes.

But if you are climbing the column, you should give yourself 30 minutes to an hour depending on how long you want to stay at the viewing platform to take pictures. Also, if you’re not in the best shape and you think you’ll want to stop occasionally to catch your breath, it’ll take you longer.

Things to do near the Victory Column

If you’re interested in spending more time in this area, there are lots of other things to do near the Victory Column.

Tiergarten is a huge inner-city park, and the Victory Column is roughly in the middle of it. Originally a hunting ground dating back to 1527, this vast green space has become one of the most loved public parks in Berlin over the years.

Throughout the park there are statues, memorials, ponds, tree-lined thoroughfares, and lawns. When the weather’s warm in Berlin, it’s here that people flock for strolling and picnicking, and it’s a great place for hanging out and relaxing.

Sometimes if I want to be a little closer to nature but I don’t have time to go too far, I enjoy spending an hour or two wandering through Tiergarten with my dog.

Brandenburg Gate, or Brandenburger Tor in German, is one of the most recognizable landmarks in Germany, and it’s about 2km away from the Victory Column. It was one of the old city gates marking the edge of Berlin, though today it’s very much in the center of the city.

When the Berlin Wall stood, Brandenburg Gate was on the East but only barely. The Wall was built around it, making it inaccessible by residents of either side.

This is a great place for pictures, and I’m betting it’s already on your Berlin bucket list.

Opened in 1894, the Reichstag Building is a unique piece of architecture. It is also where the German parliament meets, and the Victory Column originally stood in front of the building.

You can take a tour of parts of the building, mainly in the glass dome, where you can learn more about the history of Germany. This building also has a rooftop terrace and restaurant with panoramic views of Berlin.

Tours into the glass dome are free, but advanced booking is required. The Reichstag Building is located a few minutes north of Brandenburg Gate and about 2km from the Victory Column.

The Memorial to the Murdered Jews of Europe, often referred to as the Holocaust Memorial, honors the large number of Jewish people who died at the hands of the Nazis. It’s one of the most important World War II sites in Berlin.

The memorial consists of 2,711 concrete blocks of varying heights, and the ground they sit on is an uneven slope similar to a wave. The information center showcases letters, diaries, photographs, and biographies of the victims to help personalize the experience.

It’s a little over 2km from the Victory Column and a few minutes south of Brandenburg Gate. Entrance is free. Photography is allowed (no flash inside) but please be respectful.

Do not sit on or climb on the cement slabs or take selfies. This is a place to reflect and remember those who were murdered.

The Berlin Zoo is actually part of Tiergarten, located in the southwestern corner of the park about 1.7km from the Victory Column. There are two zoos in Berlin, and this is the more famous one.

This zoo has one of the highest numbers of species in the world, and there’s an aquarium. For animal lovers and those of you traveling with kids, the Berlin Zoo is a fun attraction.

Bellevue Palace sits on the Spree River on the edge of Tiergarten park, and you can get there from the Victory Column on foot in just a few minutes. It was built as a summer residence to Prince Augustus Ferdinand of Prussia.

Despite being destroyed in World War II, it has since been restored. It’s not open to the public since it’s the official residence of the German President, but it’s worth admiring from the outside.

I want you to have the best trip to Berlin, and hopefully this guide to visiting the Victory Column in Berlin is helpful. But there are lots more tips on the site! 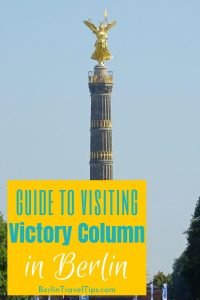 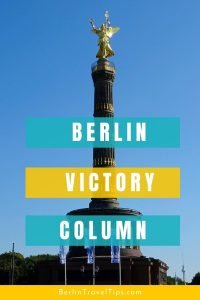 Ali is originally from the US, but she’s been living in Germany since 2011. In 2015, she and her husband moved to Berlin where they now live with their small dog. They even bought an apartment in Berlin in 2021 – Berlin is definitely home now! Ali’s goal is to show you everything you need to know for enjoying a trip to Berlin.
What to Wear in Berlin in Summer: A Packing List for Summer in Berlin 11 Pretty Places to Find Fall Foliage in Berlin

9 Tips for Visiting the East Side Gallery in Berlin