11 Fun Places to Find the Best Craft Beer in Berlin

One of the things you’re probably interested in trying while visiting Berlin is beer. Germany is well known for its beer, and you’ll find plenty of it in Berlin. But if you want to try something special, here’s where to go to find the best craft beer in Berlin.

Craft beer is usually from smaller producers and often does not conform to the German beer purity laws from the middle ages. This means there is a wide range of tastes and types.

From beers brewed in a traditional German style to quirky and wacky flavors, Berlin’s craft beer scene can’t be beat. You’ll never run out of interesting brews to taste during your trip to Germany’s capital city.

Where to find the best craft beer in Berlin

This list of where to find the best craft beer in Berlin is a mix of bars that carry beers from other producers and tap rooms that have a local brewery attached.

Most are open in the afternoon and evening during the week and earlier on the weekend. Check the websites for exact times. This is likely the largest of the local craft beer breweries. You can find their distinctive bottles at most grocery stores and Spätis.

They also have a large beer garden and restaurant near the Gleisdreieck U-Bahn station at the edge of the spacious Gleisdreieck Park. Order your beer at the tap area inside and grab a seat outside.

They have a large number of their own beers on tap, so check out the menu or ask for recommendation. BRLO also makes their own cider.

There is a limited menu available in the beer garden, or you can get a table at their restaurant for fancier food.

Nothing about this place is traditional, from the sometimes wacky beer flavors to the building made from containers to the upscale restaurant menu. But they have great beer, and it is a nice place to sit on the edge of the park.

Straßenbräu means Street Brew in German and is a good description of this Berlin craft beer bar. The location near Ostkreuz is their taproom with seats inside plus lots of tables out front.

They brew their own beer and have 12 taps that change periodically. The beers they offer cover a wide range of styles and often come with Berlin-tinged names.

Located on a tree lined street filled with other restaurants, it is a pleasant place to choose four as a testing flight of smaller beers to try out the range. They don’t offer food themselves, but they welcome you ordering from somewhere nearby and bringing it in.

If someone in your group isn’t into beer, there are other options such as wine, cider, cocktails, and non-alcoholic drinks. You can also read more on our full review of Strassenbraeu craft beer bar.

Run by Canadians in the hip end of Neukölln, Muted Horn is a great place to come for craft beer in Berlin. The bar has a small beer garden outside with tables plus plenty of seats inside.

They have a large rotating menu of beer both in bottles and on tap. Often they have interesting ciders on offer as well.

Muted Horn does not serve food, but the area around the U-Bahn station nearby has plenty of places to get a bite to eat to bring with you to the bar.

Lemke is a Berlin based craft beer brewery, but on the larger side. You can find their bottled beers in grocery stores occasionally, but the best place to find them is at one of their three locations.

Each location has a different feeling.

Their most unique location is the one near Hackescher Markt filling a space underneath the S-Bahn tracks. The curved brick ceilings house a restaurant with a large number of seats and an outdoor beer garden for warmer weather.

The food on offer is pretty common German dishes like Schnitzel, pork knuckle, sausages, and Spätzle. Try a full glass of one of their beers on tap or order the tasting flight to sample 6 x 0.1L beers.

Their other locations include one near Alexanderplatz and another near Charlottenburg Palace in the west.

Typical of the craft beer scene in Berlin, Protokoll is a small bar in Friedrichshain that has a row of taps on the wall and a well-read paper menu of bottles. Both of these rotate frequently, often with themes.

They often reach far beyond the borders of Berlin, and even Germany, to get some pretty exotic beers. Prices are a bit higher as expected for imports, but definitely unique.

The interior has a number of seats in one room and higher tables with bar stools in the other. No outdoor seating per se, but there is no law against standing on the street drinking.

They don’t have food themselves, but quite often host popup food events. Check their website for schedules.

Check out our full review of Protokoll craft beer bar.

Started by three Americans, Vagabund Brewery is one of the early success stores of craft beer in Berlin. They have a taproom and brewery in Wedding, where they also have seating and beer on tap.

Their bottled beer can be found in bars and stores across the city as well.

Vagabund’s beer types tend toward styles that aren’t as traditionally German, like IPAs and sour beers. Like many craft beer places in Berlin, the names are often as creative as the beers.

If you want to try something unique, give Vagabund a try.

In the back corner of Markthalle Neun in Kreuzberg sits Heidenpeters brewery. The brewery is in the basement with the taps directly above, so it doesn’t really get much fresher.

Some beers are available all year round, while others are seasonal or specials. No matter what, you’re in for an interesting beer brewed with unique ingredients.

You can find their beers around town at other bars and Spätis, but you should really check out Markthalle Neun and try some right at their bar.

If you are looking for locally made, super fresh, traditional German beer, then hunt out Hops and Barley.

The location in Friedrichshain has a cozy bright tavern feel, as opposed to some of the darker locales. Seats inside go back a ways or find a seat out front on one of the few outside tables during warm weather.

In comparison to many other places on this list, the appeal is not a large number of taps, but good craft beer made in a few different traditional styles. They also make a really lovely cloudy cider.

Hops and Barley does have some food, mostly simple German fare like sausages.

Two Fellas Brewery is a brewery and cozy pub in Pankow with a great selection of craft beer.

They definitely experiment with beers that don’t always follow tradition. It’s run by two guys from the US, so they have an American take on craft beer.

Their pub also serves interesting pizzas made with beer dough using their own beer. The thick dough takes longer to cook, so be patient.

Kaschk has been around for years, but they recently went into a partnership with BRLO. The atmosphere is the same, now there are a few more BRLO beers on the menu.

The beer menu changes, but you’ll always find a wide variety of tasty and interesting craft beers in bottles and on tap. About half the menu is BRLO while the other half comes from other breweries.

Kaschk also serves as a cafe during the day, so you can order coffee if you’re not ready for a beer. As for food, they have lots of cakes and other sweets, plus meat and cheese plates, sandwiches and more. Downstairs you can play shuffleboard.

This is sort of a cafe-slash-craft-beer-pub, and the combination works perfectly. It’s also centrally located, making it an easy detour for sightseers.

This place actually serves as a bar, tasting room, and a bottle shop.

You can try lots of different interesting craft beer here, or choose from over 200 different types in bottles to take away. They even have an option to get tap beer to go.

It’s not a huge space, but this is a wonderful place to go if you like options. You’re sure to find some tasty beers at Bier Laden Berlin.

Book a beer tour for your trip to Berlin

Here are a few beer tours we recommend:

I want you to have the best trip to Berlin, and hopefully this guide for finding the best craft beer in Berlin helps. But there are lots more tips on the site! 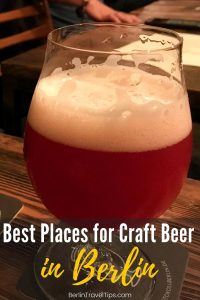 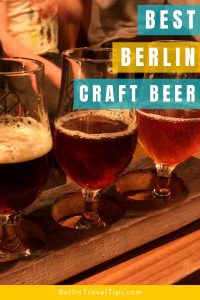 Ali is originally from the US, but she’s been living in Germany since 2011. In 2015, she and her husband moved to Berlin where they now live with their small dog. They even bought an apartment in Berlin in 2021 – Berlin is definitely home now! Ali’s goal is to show you everything you need to know for enjoying a trip to Berlin.

Ali is originally from the US, but she’s been living in Germany since 2011. In 2015, she and her husband moved to Berlin where they now live with their small dog. They even bought an apartment in Berlin in 2021 – Berlin is definitely home now! Ali’s goal is to show you everything you need to know for enjoying a trip to Berlin.
27 Famous Landmarks in Berlin You Can’t Miss Which Train Station in Berlin Should You Use?

Can You Drink Tap Water in Berlin?