You can find some really wonderful craft beer in Berlin, and one of our favorite Berlin craft beer bars is Straßenbräu in Friedrichshain. They brew their own beer and have quite a variety of types to try, plus the bar has a great atmosphere.

Picture yourself walking into a lively bar with the range of taps front and center. Recently renovated, there are plenty of tables and nooks inside with a fun exposed brick and pipe aesthetic that fits the neighborhood.

Twelve taps of their own brews gives Straßenbräu a lot of different beers to try. Without a rigid hold to German beer traditions, the beers are actually different.

Straßenbräu is a good place to chill with a craft beer served in a bright friendly atmosphere not far from the Ostkreuz station in Berlin’s Friedrichshain neighborhood.

Interested in taking a craft beer tour in Berlin? We recommend taking this one which brings you to several different locations.

Here’s what you can expect from Straßenbräu, including types of craft beer, food options, location, and more.

Note: If the German letters are tripping you up, here’s the simplified spelling: Strassenbraeu.

Type of Place: Brewery, Taproom
Allows Smoking?: No
Food options: A bare minimum of snacks and sometimes cake, but you can order food from nearby restaurants and eat it there

What kinds of craft beer does Straßenbräu have?

In Short: 12 Taps of their own beer ranging from basic to exotic as well as a fridge of cans to take-away

Here you’ll find 12 taps of Strassenbraeu beer with some regulars and some that rotate. The types of beer pull from many beer cultures, so this isn’t just that standard German types.

One of my favorites of the regular beers is called Beerengarten (Berry Garden), which is brewed on top of several types of berries and currants. It is a refreshing change from the highly hopped Pilsners.

They offer a 4 x 0.1L tasting flight. The neat thing with this flight is that you pick the beers you want in it.

Strassenbraeu has gluten-free beer and cider from other breweries in bottles, plus there’s a wine list and a spirits list for cocktails.

Tap water is also listed on the menu for free. This may seem like a joke to some, but often German restaurants seem reluctant to give it out. So it is nice to see that pointed out in a bar.

And if your visiting Strassenbraeu with a friend who doesn’t drink alcohol, there are non-alcohol options as well, like alcohol-free beer, sodas, juice, tea, and more.

>>Read: 51 Tasty German Foods to Try: What to Eat in Germany

The bar and its large blackboard of beers on tap dominates the front room when you enter the door. Beer is literally front and center here.

Off to either side are little nooks and small tables to sit with your drinks. Down one side toward the back are a few booths big enough for at least 4 people with lovely floating tables suspended from the ceiling by pipes.

I love that there isn’t a table leg below which makes sliding in and out easier. The tables are wide enough to eat if you are careful, but mainly for beer and conversation.

Though not so much fun in the winter, there are several tables out front for summer evening drinking.

Decor is half modern, half back-of-a-brewery, with exposed brick and branded signs. Lighting is pretty good, with the front room being brighter than the side space with the tables.

I’ve definitely had table service, but it is much more reliable to go up to the bar to order.

There isn’t much food on offer. I’ve seen them do cake on the weekends, but it is more of a blackboard sort of offer that changes rather than something printed in the menu.

They do have menus from one or two nearby restaurants so you can order from them and your food will be delivered to you right in the bar.

What makes it unique?

Are you interested in learning more about Berlin’s craft beer scene? A beer tour like this one will help you experience more craft beer in Berlin at several locations.

I want you to have the best trip to Berlin, and hopefully this review of Straßenbräu craft beer bar in Berlin is helpful. But there are lots more tips on the site! 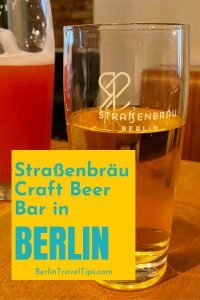 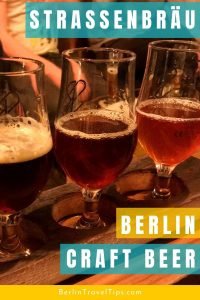 Ali is originally from the US, but she’s been living in Germany since 2011. In 2015, she and her husband moved to Berlin where they now live with their small dog. They even bought an apartment in Berlin in 2021 – Berlin is definitely home now! Ali’s goal is to show you everything you need to know for enjoying a trip to Berlin.
Berlin Craft Beer Bar: Protokoll How to Get from Berlin to Hamburg: Train and Bus Options

Can You Drink Tap Water in Berlin?